My origami and writing cave. The wall in the background has a variety of Japanese band posters, post cards etc from BUCK-TICK and THE MORTAL (side band project of the vocalist/lyricist of BUCK-TICK)... and to create a nice organic feel to it, I've filled in the spaces with color coordinating origami in black, cream, and red. Much of it isn't visible in that shot, but there are chains of red, black, and cream "Lucky Stars" with black glass beads between them, spanning at different angles between some of the posters; a black "Heart Bat" (Riki Saito), "Field Flower" (David Martinez) in both black and traditional Japanese washi, 5-pointed stars (Tomoko Fuse) in both black and red. The desk contains a traditional crane in Japanese washi, a "Tsuru Rose" (Satoshi Kamiya), "3D Rings" and a "Star" (Paolo Bascetta), and a "Loops" kusudama (an alternate of the "Kikutemari" origami kusudama (Tomoko Fuse, Yakuso Suyama)) in black and red with a white tassel and red & black glass beads.

Suggestion: if you haven't already, try experimenting with "chalkboard" wrapping paper for solid black origami. I was very surprised to find that it's my favorite paper to work with, right next to working with quality gilded washi.

Hi! Just checking- is this community still alive? Is there anyone out there that is still active on LiveJournal? 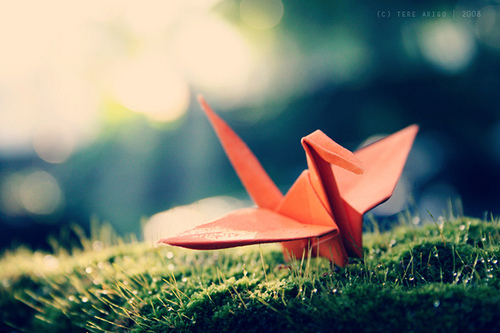 Birds of a feather flock together at the library! Join us at the Chinatown Branch Library in San Francisco, and learn how to fold a paper crane and other feathered creatures. We'll attempt to fold Senbazuru--a thousand origami cranes. According to Japanese legend, folding a thousand paper cranes will grant good luck and health. A worthy goal, let's see if we can do it! Instructions will be in English. All materials will be provided. Program is open to everyone.

Hi everyone!
I wanted to let you know about our new online store that sells origami paper. It is called www.origamipapermonster.com. We operate out of Canada and ship to everyone in USA and Canada. Check out our site and blog (blog.origamipapermonster.com) and let us know what you think! We offer free shipping on all orders over $50.

We are also looking for suggestions and feedback on how we can make our site better and what other origami products people are looking for. If you have any comments, please post them here or email us at info@origamipapermonster.com. Thanks in advance

I'm searching for this model, can anyone help me find this?

Threadless has this lovely origami crane-themed shirt for the princely sum of $10 USD! Get it while you can!

They have a buy two prints, get one free deal, so you can search the shop for other prints that might interest you. They have sets of four bookmarks you can buy as well, and you can pick which four designs you want.
Collapse